Earlier this month, EDV joined the SICSA Workshop on Argument Mining 2014 held at the Centre for Argument Technology of the University of Dundee, Scotland.

The focus of the meeting was on the semi-automatic and automatic extraction of arguments from unstructured natural language text from the perspective of information extraction, information retrieval and computational linguistics. The first session was opened by Prof Marie-Francine Moens, head of the Language Intelligence and Information retrieval (LIIR) research group of the Katholieke Universiteit Leuven, Belgium. 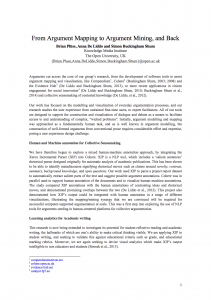 The rest of the workshop included a series of short talks by the contributing groups and a day-long joint task aimed at putting together a report on the state of the art of argument mining, the challenges and avenues to tackle them, and possible applications. The report is currently under preparation and will be published online shortly.

As well as contributing to the joint report, the EDV team at the Open University presented a position paper titled “From Argument Mapping to Argument Mining, and Back” which links argument mining to argument mapping and visualisation, with applications to citizen engagement in televised political debates, learning analytics and collective intelligence for the common good. Below are the slides and a podcast synchronised with the audio of the talk.

From Argument Mapping to Argument Mining, and Back – 9 July 2014